The lettuce pact: The ultimate hack for giving difficult feedback

We all agree telling someone when they have food in their teeth is the nice thing to do. Our CEO and Co-founder, Brennan, shares how you can bring this analogy to work to create a foundation of trust with your team. 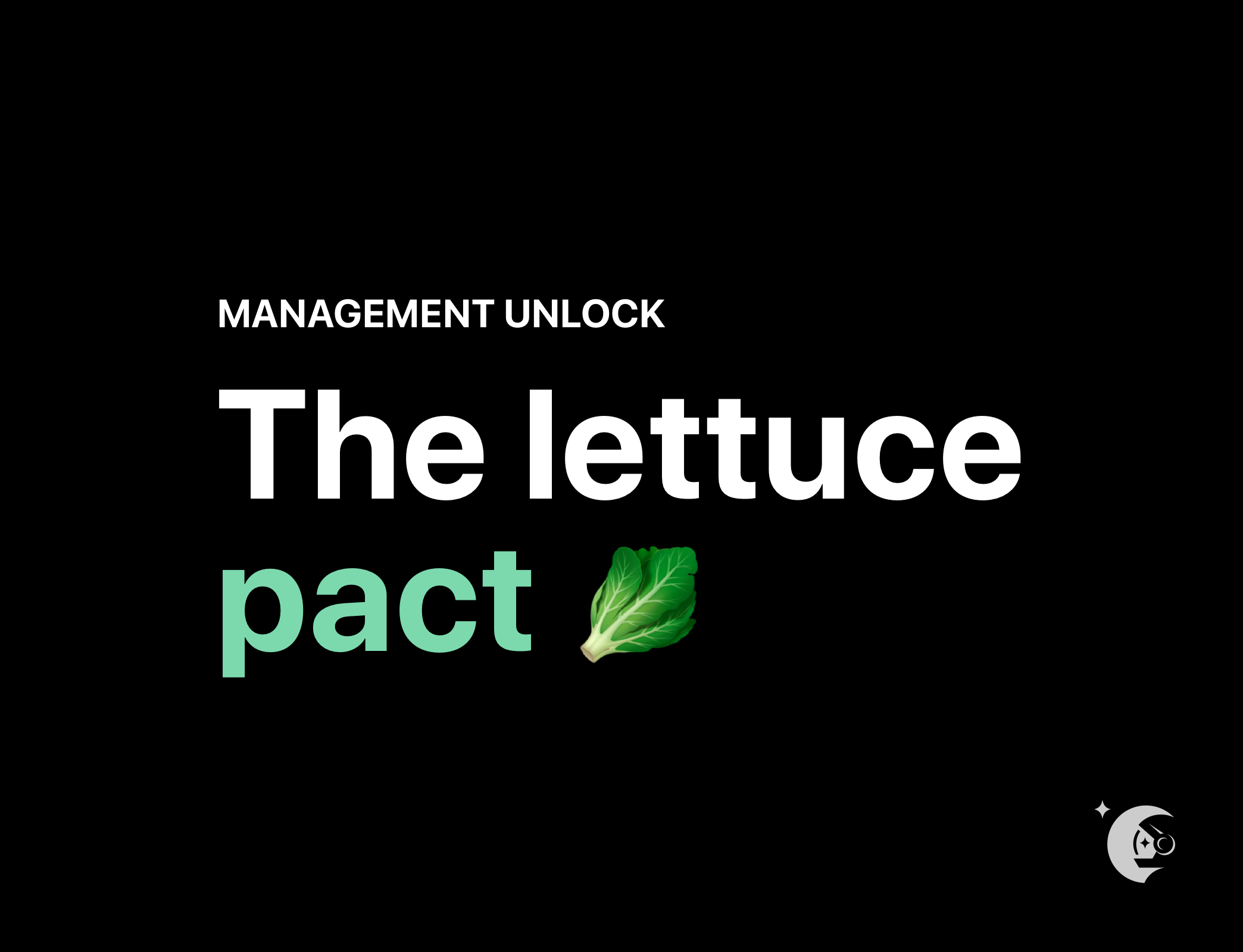 Every manager’s been in a situation when they need to give difficult feedback to an employee. It can be awkward. And sometimes the discomfort makes us feel like it’s better to sweep it under the rug than risk embarrassing them.

While we know as managers that feedback is important, it can also be exhausting — especially when you don’t know how to approach it or how it’ll be received.

In my earlier days in leadership, I experienced this a lot. Despite strongly believing in creating a culture of feedback sharing, I didn’t have the right tools to execute.

In my first 1:1s with new employees, we’d talk about my approach to management and the importance of creating a psychologically safe space where we can feel comfortable and confident sharing feedback with each other. But we’d discuss it as an abstract concept. I’d talk about what I wanted to achieve in our relationship, but not how we’d stay true to that.

Over time, I started to change the way I approached these inaugural one-on-ones. Rather than leaving the “how” assumed (you know what they say about assuming…), I introduced the lettuce pact.

The lettuce pact is one of the easiest ways to encourage continuous feedback sharing.

What is the lettuce pact 🥬?

The lettuce pact is inspired by Kim Scott’s Radical Candor approach to management. If you’re unfamiliar with radical candor, it’s focused on two things: “challenging directly” while “caring personally.” In the book, Scott refers to an example of someone having spinach in their teeth — it’s something we can all relate to. She explains that while it’s kind to tell someone when they have spinach in their teeth, a lot of people will do it wrong (i.e. in front of a big group of people) or won’t do it at all.

This resonated with me. And, at some point in my time as a manager, the vegetable evolved from spinach to lettuce and it turned into a commitment rather than simply an analogy. Hence, the lettuce pact was born. ✨

So what is the lettuce pact?

The thing is, someone probably noticed the lettuce early on, but shied away to tell them. Because of the discomfort and awkwardness associated with the confrontation, that person goes on to embarrass themselves in front of a lot more people.

Objectively, it’s clear that the right thing to do is to tell someone when they have lettuce in their teeth. We can all agree, right?

But knowing it’s the right thing doesn’t make it easier. Especially when it’s your boss.😅

At work, we face situations like this all. the. time. Someone has metaphorical lettuce in their teeth, and no one’s telling them.

Why is no one speaking up?

Because those little pieces of feedback can be challenging to share. It feels like you’re going out of your way to nitpick. For example, someone might be interrupting people too much in meetings or using “like” too much in presentations. While these aren’t major concerns, addressing them will ultimately help the person grow and, in turn, the entire team. What’s more, they likely want to know.

That’s where the lettuce pact comes into play.

The lettuce pact is an explicit agreement between you and your team member that if either of you has metaphorical lettuce in your teeth, it’s your duty to tell each other.

So when it comes time to giving those little pieces of difficult feedback, you know you already have buy-in to the conversation via the lettuce pact. And vice versa. What’s more, the feedback receiver can feel confident that you’re not trying to criticize them or make them feel small. Rather, you’ve agreed to have each other’s back so that you can both succeed at work. This comes in handy during times of sharing difficult feedback or even news like if you or an employee has decided to resign.

Why does the lettuce pact work?

At its core, the lettuce pact is a way to help create psychological safety. You’re outright communicating that you want to create a space where reciprocal feedback is not only welcome but also expected.

And you’re positioning it in a way that’s relatable and clear.

People can empathize with both sides of the lettuce dilemma. Most people have had food in their teeth and wish someone told them sooner. On the other side of the coin, most have also been in a situation where they noticed food in someone’s teeth but didn’t say anything.

No matter which way you cut it, it’s clear that alerting the person to the fact that they have food in their teeth is what’s best for them — even if it’s uncomfortable for you.

By introducing the lettuce pact, your feedback won’t get misinterpreted as malicious. Instead, it’s actually an obligation you have to your team to not let them walk around doing something that might be embarrassing, unbeknownst to them. Over time, that creates a deep sense of trust. 🤝

How to start a lettuce pact with your team

So now that you know what the lettuce pact is, and why it works, how do you add it to your manager toolbelt?

The beauty of the lettuce pact is that it’s simple to implement.

While I’ll typically make the pact in my first one-on-one with a new employee, it’s never too late. Add “lettuce pact” to your next one-on-one meeting agenda and bring it up then.

You can even make the pact official by signing this contract we’ve drafted for you:

The next time you need to share a small piece of constructive feedback, you have an easy opener to the conversation: lettuce pact. If it’s really small, you can simply send a slack message that says lettuce pact- (insert issue). If it’s a bigger piece of feedback, share it synchronously over a quick 1:1 video call. Use your discretion. But either way, the lettuce pact is an easy way to let your team member know that feedback is coming and that you’re sharing it with good intentions.

Before I sign off, here’s one more best practice when implementing the lettuce pact, or sharing any feedback for that matter:

If you do have something to share, don’t wait until your quarterly performance review— share it as soon as possible. Think about it, after a weekend can you remember anything you did the week prior? I can’t. So bringing up something that happened the week before will seem nitpicky, lettuce pact or not. Sharing feedback immediately will make it easier for both parties.