Why Your Paradigm for Collaboration is Wrong

Every company wants its people to work together towards the company’s goals. In an earlier post, we suggested that it’s very difficult to create high performance teams by dissecting attributes of great teams because teams and organizations are complex systems. The solution is to not just try to recreate the characteristics of high performing teams, but also to look at the big picture and leverage something called systems thinking. One of these big picture things is that our concept of working together is part of the problem. We tend to think of collaboration as a horizontal phenomenon. While this is true, it is incomplete. What is missing is the concept of working together vertically throughout the company, which requires a new way of thinking. But before we dive into collaboration, let’s take a step back and talk about teamwork.

As a child, I learned about teamwork from playing sports. Teamwork described how well you and your team played together and indirectly, how good a shot your team had at winning. From a young age, I learned that playing “like a team” gave you a better shot at winning. Conversely, teams that didn’t “play like a team” would usually lose. What is worse though, is that rather than simply being bested by another team, these teams would get beat by themselves.

As I entered the workforce and started paying more attention to the professional world, I started hearing a lot about the need for and importance of collaboration. Being new to the work world, I wanted to be sure of the precise definition, so I looked it up. Collaboration is defined as “Two or more people working together to achieve a common goal”. Oh, you mean teamwork.

Collaboration and teamwork mean the same thing. They are both the process of two or more people working together to realize shared goals. I was relieved upon realizing this. After all, I had thousands of hours of experience in sports and school to draw from. But of course, things aren’t always so straightforward.

We start learning at an early age that teamwork is the way to accomplish great things. The following is an example of a question from a fourth grade test: When people work together to build a house, will the job probably (a) get done faster, (b) take longer to finish, or (c) not get done? The obvious “answer,” of course, is supposed to be a—the work gets done faster. This anecdote comes from an HBR interview with Richard Hackman, the Edgar Pierce Professor of Social and Organizational Psychology at Harvard University and a leading expert on teams. Hackman loves this anecdote because it illustrates how early we’re told that teamwork is good. I have no question that when you have a team, the possibility exists that it will generate magic, producing something extraordinary, a collective creation of previously unimagined quality or beauty.”

But don’t count on it. Research consistently shows that teams underperform, despite all the extra resources they have. That’s because problems with coordination and motivation typically chip away at the benefits of collaboration. He goes on to say, “In our recent book Senior Leadership Teams, Ruth Wageman, Debra Nunes, James Burruss, and I collected and analyzed data on more than 120 top teams around the world. Not surprisingly, we found that almost every senior team we studied thought that it had set unambiguous boundaries. Yet when we asked members to describe their team, fewer than 10% agreed about who was on it. And these were teams of senior executives!”

This concept relates to something else I noticed about teamwork. It is incomplete when approaching  it as horizontal in nature. Classically, the term is used to describe working relationship with peers, teammates or classmates, but not used to describe relationships with coaches, managers, or teachers. We use collaboration to describe peer relationships. But we don’t naturally apply this to managers collaborating with employees. This is a mistake. 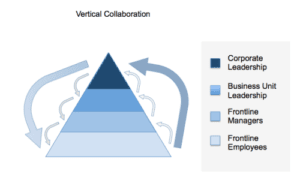 Managers and employees should be working together to try to realize shared goals.  That’s exactly what we want them to do because it benefits the entire organization. When you say it that way (straight to the definition), it sounds obvious. So why isn’t it natural to think of them as collaborating?

I think part of the problem is we have been stuck in a mental model that explains collaboration as being horizontal by nature.

In a corporate setting, everyone employed by the company is part of the team responsible for hitting company targets and goals. The entire org chart: side to side and up and down, depends on it.  If our definition of collaboration only works side to side, we are not only missing a huge opportunity, we will never be able to truly play like a team.